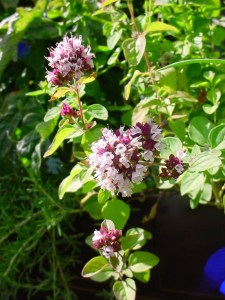 The herb known as common oregano (Origanum vulgare Linn.) is a member of the mint family (Lamiaceae), a grouping of botanicals that are aromatic in most, if not all, parts of their plant structures, i.e., the leaves, stems, roots, and seeds.

Besides oregano, mints include a variety of familiar culinary herbs such as basil, peppermint, rosemary, sage, savory, marjoram (often substituted for oregano), thyme, lavender, and perilla. The mint family also includes shrubs such as Stauton elsholtzia (Elsholtzia stauntonii), trees  such as teak (Tectona grandis), and a few vines. Many mints are easily cultivated, owing not only to their aromatic qualities but also their ease of cultivation, and often are propagated by stem cuttings, and are not only prized for culinary purposes but for decorative uses as well.

Mint leaves are decussate, or whorled (arranged oppositely, both with respect to each leaf pair as well as in successive pairs) on the stem. Many, but not all, mint stems exhibit a square cross section. Their flowers have five united petals and sepals, and are bilaterally symmetrical, typically bisexual, and verticillastrate.

Origanum vulgare is a complex herb with a long history of culinary usage, and a well-known safety profile. It is known to express, in its oils and aqueous extracts, over 21 important, individually identifiable compounds, many of which have been celebrated for centuries, by natives living within its natural range, for their medicinal properties. It, along with most of the other members of the Lamiaceae family, has been the subject of numerous scientific inquiries regarding the efficacy of its chemical constituents as — among the medicinal and health-maintinence faculties discovered long ago — antioxidants, fungicides and antibiotics.

The major components of oregano essential oil have been identified as carvacrol, β-fenchyl alcohol, thymol, and γ-terpinene. Hot water extract had the strongest antioxidant properties and the highest phenolic content, but all the hot-water extracts were ineffective in inhibiting the growth of  seven bacteria they were tested with. On the other hand, the essential oil inhibited the growth of all bacteria, causing greater reductions on both Listeria strains (L. monocytogenes and L. innocua).

Another role of these constituents involves their use, singly or in combomnation, as micro-cleansers and habitat modifiers, assisting mankind in our never-ending quest to improve the quality of our lives. Analyses of scientific studies relating to these topics is underway in conjunction with a series of experiments being conducted in the EntomoBiotics Inc. laboratory. Details will be presented here, in future expansions of the content of this article. A partial list of recent scientific papers on this subject is provided below. 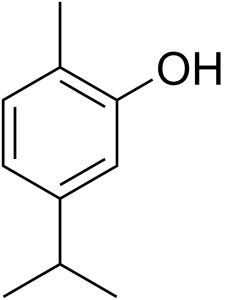 Carvacrol (5-isopropyl-2-methylphenol[citation needed]
2-Methyl-5-(1-methylethyl)-phenol), has the chemical formula C10H14O. is a monoterpenoid phenol with the characteristic odor of oregano. It is isomeric with thymol.

Carvacrol, also known as cymophenol, is a monoterpenoid phenol. It is present in the essential oil of Origanum vulgare (the herb we know as oregano), oil of thyme, oil obtained from pepperwort, and wild bergamot. Essential oil of Thyme can contain as much as 75% carvacrol; the Satureja (savory) subspecies have a content between 1% and 45%; Origanum majorana (marjoram) and Dittany of Crete have 50% and 60-80% respectively.

β-fenchyl alcohol has the chemical formula C10H18O, and is sometimes referred to as exo-α-Fenchol. The molecule is present in nature in the form of five stereoisomers, endo-Fenchol, Fenchol, Fenchol, exo-, α-Fenchol, and α-Isofenchol. Fenchol or 1,3,3-trimethyl-2-norbornanol is a terpene and an isomer of borneol. The naturally occurring enantiopure (1R)-endo-(+)-fenchol is used extensively in perfumery. Fenchol is also a scent derived from basil.

Also known as 2-isopropyl-5-methylphenol, IPMP, thymol is a natural monoterpene phenol derivative of cymene, C10H14O, is isomeric with carvacrol, is found in oil of thyme, and is extracted from common thyme (Thymus vulgaris) and various other kinds of plants. In pure form it is a white crystalline substance with a pleasant aromatic odor and strong antiseptic properties. Thymol is the source of the distinctive, strong flavor of thyme, the culinary herb. Thymol is an important biocide, as it possesses strong antimicrobial attributes when used alone or with other biocides such as carvacrol. Naturally occurring biocides such as thymol can reduce bacterial resistance to common drugs such as penicillin. Studies demonstrate that the antimicrobial effects of thymol range from inducing antibiotic susceptibility in drug-resistant pathogens to powerful antioxidant properties. Research  that naturally occurring biocides such as thymol and carvacrol act as synergists. Thymol is also an effective fungicide, and is unusually effective against fluconazole-resistant fungi strains, a finding important to immuno-compromised individuals susceptible to Candida fungal infections, since current treatments for Candida are highly toxic, have a low efficacy, and often result in drug-resistant Candida strains. Compounds in the essential oils of one type of oregano have demonstrated antimutagenic effects, and in particular carvacrol and thymol were demonstrated to have a strong antimutagenic effects. Further, though the mechanism is not yet known, thymol has antitumor properties, probably through its ability to disrupt cancerous tumor cell membranes.