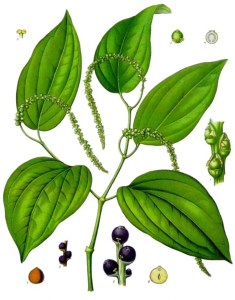 Black pepper (Piper nigrum), a flowering vine in the Piperaceae family, is widely cultivated for its fruit. The fruit, whether intact or in the form of a denuded seed is, once dried, usually minced or ground into a coarse to fine powder, then used as a spice and seasoning named for the way it has been processed.

When fresh and fully mature, the black pepper fruit measures about 5 millimeters (0.20 inch) in diameter, and is dark red in color. Being a drupe, the fruit contains but one seed. Peppercorns, and the ground pepper derived from them, are often known simply as (undifferentiated) pepper. The unripe fruit, when cooked and dried, is typically known as black pepper. If the unripe fruit is simply dried, the peppercorns and the spice derived from them is known as green pepper. Last, when the fruit is allowed to ripen fully, then to dry and flake away from the fruit seeds, it is known as white pepper.

Black pepper, which is native to south India, is now extensively cultivated in a variety of tropical regions. In 2013, 118,000 metric tons of black pepper (34% of worldwide black pepper production) was produced in Vietnam, and that number is rising.

Black pepper, recognized as the world’s most traded spice, is among the most common spices used in cuisines worldwide. Its pungency is derived from the alkaloid, Piperine, along with its isomer chavicine. It was first isolated from the fruits of Piper nigrum in 1819 by Hans Christian Ørsted. Later, Flückiger and Hanbury found piperine in Piper longum and Piper officinarum, two species in the genus Piper known as “long pepper”.

Piperine is concentrated in both from the outer fruit and the seed. Black peppercorns contain between 4.6% and 9.7% piperine by mass, and white pepper, derived from the seed, contains somewhat more. Compared with capsaicin from chili peppers, refined piperine is, by weight, onlty about 1% as hot.

Besides piperine, the outer fruit layer of the dried peppercorn contains a number of terpenes, including pinene, sabinene, limonene, caryophyllene, and linalool. These impart citrusy, woody, and floral notes that are not present in appreciable amounts in white pepper. Due to its more lengthy fermentation, white pepper acquires its own distinct notes, including a tantalizing mustiness.

From a technical standpoint, in order to spice up our lives, piperine activates the heat- and acidity-sensing TRPV ion channel TRPV1 and TRPA1 pain-sensing nerve cells, also known as nociceptors. But this functionality is not the only magic that piperine works in mammalian biology. It is also known for its bioavailability-enhancing abilities, though the full mechanism involved is unknown. What is known is that piperine inhibits human CYP3A4 and P-glycoprotein, enzymes important for the metabolism and transport of xenobiotics and metabolites, and that, in some animals, piperine inhibits other CYP 450 enzymes important for drug metabolism. It is this functionality that has intrigued scientists most in the past decade.

In general, a ‘bioavailability enhancer’ is a drug facilitator. Though the enhancer itself doe not show typical drug activity, when used in combination with certain drugs it functions to exaggerate the activity of drug molecule. This enhancement includes increasing the bioavailability of the drug across a membrane, potentiating the drug molecule by inhibiting deactivating enzymes, functioning as a receptor for the drug molecule, and making a target cell more receptive to the drug.

Though the mechanism involved is not known, piperine is known to increase serum levels of some nutriments, and lengthen the serum half lives of others, including coenzyme Q10 and beta-carotene. In combination with such supplements as turmeric and resveratrol, for example, it has been shown to increase both the absorption of each supplement, and inhibit the metabolism of the supplement molecule, enabling it to produce longer lasting results.