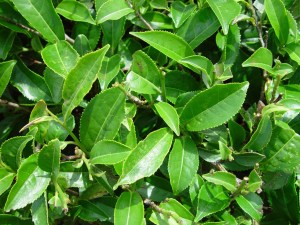 The tea plant (Camellia sinensis), an evergreen shrub or small tree, is native to Southeast Asia, East Asia, and the Indian Subcontinent. Today it is found around the world, primarily in tropical and subtropical climes. Often it is cultivated for its leaves which are used to make the beverage we call tea.

The seeds of Camellia sinensis and a close relative, the oil-seed Camellia (Camellia oleifera) yield a sweet cooking oil commonly known as tea oil. Tea oil should not be confused with the pungent tea tree oil, derived from leaves of the tea tree (Melaleuca alternifolia), used in medicines and cosmetics.

Tea plant leaves — 4–15 cm (1.6–5.9 in) in length and 2–5 cm (0.79–1.97 in) wide — are light green when young, with short white hairs on their ventral surfaces. The young, light green leaves are preferred for making tea. The leaves contain caffeine and a number of related compounds including theobromine and a specific group of catechins found in higher concentrations in tea leaves than in most other botanicals. Catechins constitute about 25% of the dry mass of a fresh tea leaf. Chinese green tea leaves contain almost six times the concentrations of these catechins compared to the black tea leaves most commonly favored by Western cultures. White tea leaves, which are processed and oxidized the least, have even greater concentrations of these catechins.

The average person worldwide is familiar with the aromatic beverage prepared by pouring hot or boiling water over cured leaves of the tea plant. That drink is — excepting only unadulterated water itself — the most widely consumed beverage in the world. Many types of tea are recognized, including Chinese green (Oolong) teas produced according to traditional Chinese methodology, White, and Darjeeling (black) plus a slew of other Western black teas, most of which are graded according to the Orange Pekoe leaf grading system.

The custom of making and drinking tea originated in southwestern China, where it was originally used for medicinal purposes.

NOTE: Due to the important Chinese origins of this plant, it is appropriate to take a moment to consider the way the Chinese referred to it in writing. The Han character for tea is 茶 (pronounced chá in Mandarin); that character is synonymous with 茗 (pron. míng in Mandarin, and ming in Cantonese), to the point that the combination of both characters (茗茶, pronounced míng chá in Mandarin) signifies “good tea.” 茶 is a nine stroke pictogram that was derived from the archaic form 荼, pron. tu, and having the meaning of a bitter plant; note that the two characters are almost identical, except that the archaic version has 10 strokes, with an added cross stroke in the 8th position (the character is written from the top left, downward). Bitterness in Chinese, as in typical Western languages, characterizes both a taste and an emotion, as the character 苦 (pron. ku) demonstrates; 苦 means bitter, painful, or hard (difficult), and shares the first three strokes with 茶, the Chinese word for tea; this latter character stands both for the tea plant and the beverage made from its leaves. In earlier times 茶 also was used to define a moment, i.e., the amount of time it takes to drink a cup of tea.

During the Golden Age of the Chinese Tang dynasty (618-907 C.E.) tea drinking became widespread in China. The custom soon was exported to other East Asian countries. It was introduced to the West during the 16th century by Portuguese priests and merchants. The British, who made tea drinking fashionable in the West during the 17th century, started large-scale production and commercialization of the plant in India, effectively bypassing the monopoly on tea trade that had previously been enforced by the Chinese.

The British also introduced a new methodology in tea processing, resulting in what we call black tea today. That process (sometimes erroneously called fermentation, as no fermentation takes place) involved a more thorough oxidation and drying of the tea leaves. This was done to add shelf life, enabling shipping of the processed tea leaves without rotting or mildewing enroute. It also modulated the astringent notes common to green teas, giving the tea brewed from black tea leaves a reddish hue and a more subtle flavor, but also neutralized some of the natural antioxidants in the leaves.