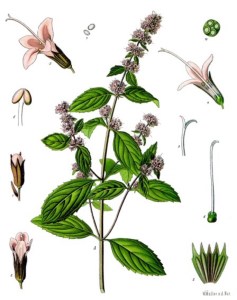 Peppermint (Mentha × piperita), is also known as M. balsamea Willd. As the species designation — G x s — indicates, it is a hybrid, being a cross between watermint and spearmint, and as with typical hybrids is usually sterile, produces no seeds, and propagates vegetatively via its wide-spreading rhizomes. This botanical, which is indigenous to Europe and the Middle East, is widely cultivated throughout the world.

When first formally described in 1753 by Carl Linnaeus, who used specimens from England, it was erroneously considered a species. As a herbaceous rhizomatous perennial plant, peppermint grows from 30–90 cm (12–35 in) tall. It has smooth stems that have a square cross section. Peppermint rhizomes are fleshy with bare, fibrous roots. Its leaves measure from 4–9 cm (1.6–3.5 in) in length 1.5–4 cm (0.59–1.57 in) in width, are dark green with reddish veins, and display coarsely toothed margins. Flowers, which are purple and 6–8 mm (0.24–0.31 in) in length, have a four-lobed corolla about 5 mm (0.20 in) in diameter, and are produced in whorls (verticillasters) around the stem, where they form thick, blunt spikes. Flowering is from mid to late summer. Chromosome counts of 66, 72, 84, and 120 have been recorded

Peppermint prefers moist habitats proximate to streams and drainage ditches. A hardy plant, it usually manages to grow wherever it is planted.

Peppermint leaves and flowering tops are collected for culinary and perfumery purposes once the flower buds begin to open and can be dried.