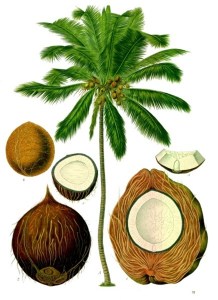 The coconut palm (Cocos nuciferia) is an angiosperm (i.e., a flowering, seed-bearing plant), a monocot (having a single seed leaf), and a member of the Arecaceae (palm) family. It was first described by Carl Heinrich Schultz (1798-1871), the same German botanist who first described the Arecaceae.

The palm family as a whole is recognized, today, as having over 200 genera and about 2600 species. Most are found in tropical, subtropical, and the warmer of earth’s temperate regions, and include a diversity of morphological forms, ranging from vines and shrubs to trees. Fruits vary considerably, from tiny fruits unrecognizable as such to small, soft, sugary dates, and upward in size and heft to the large, heavily encased coconuts depicted by Franz Eugen Köhler in his 1887 book, Medizinal-Pflanzen.

The American botanist Harold Emery Moore, Jr. (1917–1980) devoted much of his career to work on the systematics of the palm family. His research culminated, in the 1970’s, in the organization of the Arecaceae family into fifteen major morphological groups. In 1987 a revision of Moore’s classification, proposed by Natalie W. Uhl and John Dransfield in their beautifully illustrated book, Genera Palmarum: A Classification of Palms Based on the Work of Harold E. Moore, reorganized the palms into six subfamilies, the largest being the Arecoideae, which includes subject of this article, the coconut palm.

The generic name Cocos seems, superficially, to be derived from the Greek word κοκκος, which means “a grain, berry, or kernel.” It happens, though, that the word cocos, which is common to the Spanish and Portuguese languages, has the meaning of “a grinning face,” and it was this name that was applied, early on, to the denuded shell of the coconut fruit. With the covering husk removed to expose the thin, brown, hardened semi-spherical casing surrounding the white endosperm and the liquid coconut water it encloses, the shell has, at its proximal end, three darkened depressions that have the appearance of a human or monkey visage.

The genus Cocos has but one species, nucifera, a specific epithet applied by Schultz, probably by combining two Latin words: nucelus = a kernel, a little fruit + the Latin word ferax = fertile, fruitful, prolific. The name is appropriate. Coconut palms are distributed throughout most of the earth’s the tropical and subtropical regions, where every part of the fruit is utilized for a variety of domestic, commercial, and industrial purposes. The coconut fruit — which is not a true nut but a drupe — consists of an endosperm of white, edible, meat that in dried form is called copra. The oil and milk derived from copra are used in cooking, soap-making, and as an important ingredient in cosmetics.

Liquid coconut water, which is sterile when freshly removed from the coconut fruit’s interior, is a nutritious, refreshing beverage. Though its chemistry is unlike blood plasma in several respects, it is similar enough to make it suitable for use, under emergency conditions, in blood transfusions. WWII reports of such usage are well documented, as are similar reports of native Vietnamese soldiers being so treated on the battlefields of the War in Vietnam.

Coconut husks and leaves are often used as raw materials for the manufacture of furniture, bedding, and for kitchen and eating implements.

Capric acid, also known as decanoic acid, is a saturated fatty acid with the chemical formula CH3(CH2)8COOH. Its salts and esters are termed decanoates or “caprates”.

Capric acid is a C10 medium-chain saturated fatty acid with the chemical formula CH3(CH2)8COOH and the systematic name n-decanoic acid. It is one of twelve carboxylic acids found in nature. Its salts and esters are referred to as decanoates. The name capric is a derivation of the Latin word capra = “a she-goat,” in reference to the odor of the pure lipid. Two other carboxylic fatty acids, caproic (C6)and caprylic (C8) acid, received their common names via the same etymological route.

This fatty acid comprises 6-10% of natural coconut oil, and 3-5% of palm kernel oil. It is also present in the milks of some mammals and the fats of a number of different animals. It shows considerable influence on animal biology, in a variety of ways. For example, a study published in 1991 reported on the ability of capric acid to relax human blood vessels, an effect with promise in the treatment of stroke victims (White et al. 1991).

Other studies indicate that the presence of capric acid effectively inhibits the development of certain yeasts, including Candida albicans. The latter is the most common opportunistic fungal pathogen isolated from human body, and is well known as the cause of superficial and systemic human diseases (Murzyn et al. 2010).

Of 11 fatty acids and monoglycerides tested against the microbe Campylobacter jejuni, which is one of the most common causes of human gastroenteritis in the world, the 1-monoglyceride of capric acid (monocaprin) was found to be the most effective at killing it. The researchers in that study prepared various monocaprin-in-water emulsions, finding them stable after storage at room temperature for many months during which they retained their microbicidal capabilities (Thormar et al. 2006).

Lauric acid, also known as dodecanoic acid, is a saturated fatty acid with a 12-carbon atom chain, thus falling into the medium chain fatty acids. It is a white, powdery solid with a faint odor of bay oil or soap.

Lauric acid is a C12 medium-chain saturated fatty acid with the chemical formula CH3(CH2)10COOH, and the systematic name dodecanoic acid. It and myristic acid, discussed below, have been the subjects of much speculation, negative and positive, regarding their association with cholesterol in human biology.

Because these medium-chain saturated fatty acids have a melting point above room temperature (solidifying at 76 degrees F. and below), they were initially classed with saturated fatty acids of animal origin — such as the stearic acid in beef tallow and pork lard — that also solidify at room temperature. This led to the supposition that their regular consumption, by humans, would produce similar, if not identical, pathological conditions. The presumption that the fatty acids in coconut oil — particularly the two most prevalent, lauric and myristic acids — are atherogenic (i.e., are agents that cause atherosclerosis),  originated from this belief.

Nutritional science moves slowly. If, as many today believe, the supposed atherogenic effect of coconut oil is not only incorrect but off by as much as 180 degrees (i.e., instead of causing atherosclerosis, coconut oil actually reduces the risk of atherogenesis, making coconut oil what some call a miracle oil), it will take time and a number of rigorous, convincing, scientific studies to bring the point home. Fortunately, the scientific community has risen to the challenge, and a host of studies, some spanning several decades in time, have sought answers to these very questions. Some are listed below, under references to scientific papers (all references are linked to Internet sources where the paper may be read in full), and interested persons are encouraged to click on the link and read through them.

Scientific analysis suggests that while coconut oil is not the villain it is often portrayed as, it is also not the miracle oil its protractors claim it to be. The various lipids contained in coconut oil behave in unique ways within the human body, and the differences between them significantly affect their usefulness in human nutrition as well as in all the other ways these oils are used in our daily lives.

Myristic acid, also known as tetradecanoic acid, is a common saturated fatty acid with the molecular formula CH3(CH2)12COOH. A myristate is a salt or ester of myristic acid. Myristic acid is named after the nutmeg Myristica fragrans.

Myristic acid is a C14 medium-chain saturated fatty acid with the chemical formula CH3(CH2)12COOH, and the systematic name tetradecanoic acid. The name is derived from its most concentrated source, the nutmeg, Myristica fragrans. Nutmeg butter is comprised of 75% trimyristin, the triglyceride form of myristic acid.

Myristic acid is a major constituent of palm kernel oil, coconut oil, and butter fat, and is also present in small amounts in a number of animal fats, including spermacetin, the crystallized fraction of oil from the sperm whale. Myristic Acid is often used as a cleansing agent, a surfactant, and an opacifier, in a variety of products, including cosmetics and personal care formulas.

Palmitic acid, also known as hexadecanoic acid, is the most common fatty acid (saturated) found in animals, plants and microorganisms.[9] Its chemical formula is CH3(CH2)14COOH. As its name indicates, it is a major component of the oil from palm trees (palm oil), but can also be found in meats, cheeses, butter, and dairy products.

Palmitic acid is the first fatty acid produced during fatty acid synthesis (Excess carbohydrates in the body are converted to palmitic acid) and the precursor to longer fatty acids. As a consequence, palmitic acid is a major body component of animals. In humans, one analysis found it to comprise 21–30% (molar) of human depot fat, and it is a major, but highly variable, lipid component of human breast milk. Palmitate negatively feeds back on acetyl-CoA carboxylase (ACC), which is responsible for converting acetyl-CoA to malonyl-CoA, which in turn is used to add to the growing acyl chain, thus preventing further palmitate generation. In biology, some proteins are modified by the addition of a palmitoyl group in a process known as palmitoylation. Palmitoylation is important for membrane localisation of many proteins.

Palmitic acid is used to produce soaps, cosmetics, and release agents. These applications utilize sodium palmitate, which is commonly obtained by saponification of palm oil. To this end, palm oil, rendered from palm tree (species Elaeis Guineensis), is treated with sodium hydroxide (in the form of caustic soda or lye), which causes hydrolysis of the ester groups. This procedure results in the production of glycerol and sodium palmitate.

Because it is inexpensive and adds texture to processed foods (convenience food), palmitic acid and its sodium salt find wide use including foodstuffs. Sodium palmitate is permitted as a natural additive in organic products. The aluminum salt has been used as a thickening agent in the production of napalm used in military actions.

Hydrogenation of palmitic acid yields cetyl alcohol, which is used to produce detergents and cosmetics.

Recently, a long-acting antipsychotic medication, paliperidone palmitate (marketed as INVEGA Sustenna), used in the treatment of schizophrenia, has been synthesized using the oily palmitate ester as a long-acting release carrier medium when injected intramuscularly. The underlying method of drug delivery is similar to that used with decanoic acid to deliver long-acting depot medication, in particular, neuroleptics such as haloperidol decanoate.