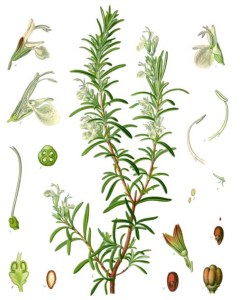 The woody perennial evergreen herb we know as rosemary (Rosmarinus officinalis) has green needle-like leaves that resemble those of hemlock, and white, pink, purple, or blue flowers. It is a member of the mint family (Lamiaceae).

A native of the Mediterranean region, its name is from two Latin roots that in combination mean “dew of the sea” is formed from the combination of two Latin nouns: ros, “dew” and marinus, “sea.” In some locales it is known by the ancient Greek word ἄνθος (AN-thoze), which means “flower”.

A hardy plant, rosemary is easily cultivated and resists a broad range of pests. Surprisingly adaptable to cold and drought, it is suitable as an ornamental shrub throughout a range of climates. It prefers friable, well-drained soils. Erect shrubs can grow to heights of 2 meters (6.5 feet). The needle-like leaves, which grow to 2–4 centimeters (0.8–1.6 inches) long but only 2–5 mm across, are a glabrous and green dorsally, with pubescent white underparts. Flowers emerge in spring and summer in temperate regions, but bloom constantly in tropical climes.

Rosmarinic acid, which has long been known for its general antioxidant and anti-inflammatory effects when applied topically to the skin or ingested in the diet, is also an effective antiviral and antibacterial, and has recently been shown to protect against a number of cancers. Besides being an important constituent of the rosemary herb, rosmarinic acid is also found in many other members of the mint family (especially those in the subfamily Nepetoideae), in basil and holy basil, lemon balm, marjoram, sage, thyme, self-heal (Prunella vulgaris), and  others.

As a result of the health promoting and medicinal values of rosmarinic acid, comparative analyses have been conducted to determine the best sources available. One such study of the rosmarinic acid content of various herbs and plants (Shekarchi, et al., 2012), produced the surprising revelation that — while dried rosemary herb contained 7.2 mg/g — spearmint (Mentha spicata), contained more than eight times as much (58.5 mg/g).

Though spearmint had the highest content of rosmarinic acid of all the herbs that were tested in that study, many others also were found to contain considerably more than rosemary. For example, sage (Salvia officinalis) had 5.5x (39.3 mg/g), lemon balm (Mellisa officinalis) 5 x (36.5 mg/g), lemon thyme (Thymus citriodorus) and the Russian sage Perovskia artemisioides 4.4x (31.5 and 31.3 mg/g, respectively), and peppermint (Mentha piperita) 5x (28.2 mg/g).

In a study by Ozcan & Chalchat, published in 2008, the essential oil of the dried above-ground parts of wild rosemary collected in Konya, Turkey was analysed by gas chromatography and gas chromatography-mass spectrometry. The oil, which was obtained by hydrodistillation, and was comprised of monoterpenic hydrocarbons, oxygenated monoterpenes and sesquiterpene hydrocarbons, represented 1.9%  of the herb. Twenty recognized compounds were identified, including p-cymene (44.02%), linalool (20.5%), gamma-terpinene (16.62%), thymol (1.81%), beta-pinene (3.61%), alpha-pinene (2.83%) and eucalyptol (2.64%).

p-Cymene, 1-Methyl-4-(1-methylethyl)benzene, has the chemical formula C10H14, it is and alkylbenzene related to a monoterpene. Its structure consists of a benzene ring para-substituted with a methyl group and an isopropyl group.

p-Cymene, a prominent constituent of essential oil extracted from dried rosemary herb, is a naturally occurring alkylbenzene related to a monoterpene. Its structure consists of a benzene ring para-substituted with a methyl group [i.e., an alkyl (of or denoting a hydrocarbon radical) derived from an alkane (a saturated hydrocarbon consisting only of hydrogen and carbon atoms wherein all bonds are singular) as a consequence of the removal of a hydrogen atom derived from methane, containing one carbon atom bonded to three hydrogen atoms, thus CH3) and an isopropyl group [a propyl (a linear three-carbon alkyl substituent, with chemical formula CH2CH2CH3, obtained by removing one hydrogen atom attached to the terminal carbon of propane {a three-carbon alkane with the molecular formula C3H8}with a group attached to the secondary carbon].

p-Cymene is insoluble in water, but miscible with ethanol and diethyl ether. It is absorbed through the skin: studies using (14)C-labelled p-cymene observed a rate of penetration of 254 ug/sq cm over a 60 minute interval.

According to one authoritative study (Matsumoto, T., et al. 1992. Chem Pharm Bull (Tokyo) 40 (7): 1721-6) of the rate of metabolism of p-cymene in rats and guinea-pigs following intragastric or inhalation dosage (100 mg/kg), urinary metabolite excretion was nearly complete within 48 hr, amounting to 60-80% dose. In inhalation experiments 18 urinary metabolites were detected and identified and, of these, rats did not excrete two and guinea-pigs did not excrete a third. No ring-hydroxylation of p-cymene was detected in rats, but guinea-pigs formed small amounts of carvacrol and hydroxycarvacrol. Oxidation of both the methyl and isopropyl groups of p-cymene occurred extensively in both species. The following types of metabolites were formed: monohydric alcohols, diols, mono- and di-carboxylic acids and hydroxyacids. Conjugation with glycine of the cumic acid formed was extensive in guinea-pigs.

Another study (Zhong, W. et al. 2013; Inflammation 36 (3): 529-37), investigated the effects of p-cymene on lipopolysaccharide (LPS)-induced inflammatory cytokine production, both in vitro and in vivo, and produced evidence that p-cymene has potential anti-inflammatory effects on cytokine production. The production of tumor necrosis factor-a (TNF-a), interleukin-1beta (IL-1beta), interleukin-6 (IL-6), and interleukin-10 (IL-10) in LPS-stimulated RAW 264.7 cells and C57BL/6 mice was evaluated by sandwich ELISA, and the mRNA levels of cytokine genes were examined in vitro by semiquantitative RT-PCR. A further study analyzed the activation of nuclear factor-kB (NF-kB) and mitogen-activated protein kinase (MAPK) signaling pathways by western blotting. It was discovered that p-cymene significantly regulated TNF-alpha, IL-1beta, and IL-6 production in LPS-stimulated RAW 264.7 cells and downregulated the levels of relative mRNAs. In in vivo trail, p-cymene suppressed the production of TNF-a and IL-1beta, increased IL-10 secretion, and inhibited LPS-induced activation of extracellular signal receptor-activated kinase 1/2, p38, c-Jun N-terminal kinase, and IkBalpha. 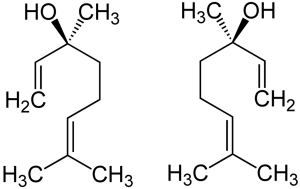 Another prominent constituent of the essential oil extracted from dried rosemary herb, linalool is a naturally occurring terpene alcohol that is also found in many other flowers and spice plants. This terpene is best known for its floral, spicy scent. Thus it is used extensively in commercial air fresheners and similar applications, where it may identified in the product label under one of the following synonyms: β-linalool, linalyl alcohol, linaloyl oxide, p-linalool, allo-ocimenol, and 3,7-dimethyl-1,6-octadien-3-ol.

Two enantiomeric stereoisomers exist for linalool, both of which are found in nature. Enantiomers are stereoisomers related by reflection: i.e., like their human hand macro-analogs, they are mirror images that cannot be superimposed. Every stereogenic center in one has the opposite configuration in the other. Enantiomers of a compound possess the same physical constituents. However, the fact that they rotate polarized light in different directions and interact differently with various optical isomers of other compounds often leads to distinct biological effects. Pure enantiomers also exhibit the phenomenon of optical activity and can be separated only with the use of a chiral agent. In nature, only one enantiomer of most chiral biological compounds, such as amino acids (except glycine, which is achiral), is present.

The enantiomeric form (S)-linalool is a major constituent of the essential oil extracted from the seed of coriander (Coriandrum sativum), and from the flowers of palmarosa (Cymbopogon martinii var martinii), and sweet orange (Citrus sinensis). (R)-linalool is a constituent of lavender (Lavandula officinalis), bay (Laurus nobilis), sweet basil (Ocimum basilicum), and others.

Each of linalool’s enantiomers evoke distinct neural responses in humans. (S)-(+)-Linalool is perceived as sweet, floral, greenish woody orange smell, and has an odor threshold 7.4 ppb. The (R)-form, by contrast, tends toward a woody lavender-like fragrance, and — with an odor threshold 0.8 ppb — takes only about 1/10th as much to evoke a neural response. 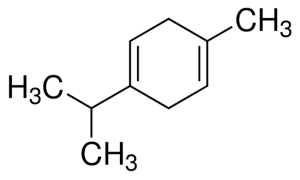 Gamma terpinene. Note the similarity to p-cymene, and to linalool. This same structure is also similar to that of carvacrol and its isomeric version thymol, both of which are derived from p-cymene by the addition of a hydroxyl group.

Gamma terpinene has been found in concentrations of 17% of the oil extracted from dried rosemary. It has a molecular weight of 136.23404 g/mol, and a molecular formula of C10H16.

References:  In process… we do not post references that are not in our at-hand library and that we have not thoroughly examined. The vetting process takes time. A list of appropriate references relevant to the matter presented in this article is posted below: