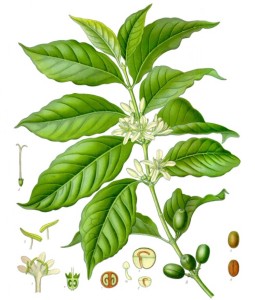 Coffea arabica is the species, in the genus Coffea, that is the most popular source of the coffee beans used to make the coffee beverage. 75-80% of the world’s coffee production comes from this plant, while about 20% comes from another species, Coffea canephora. Characterized as a small tree, native of the forests of the southwestern highlands of Ethiopia, Coffea arabica was the first species of Coffea to be cultivated. 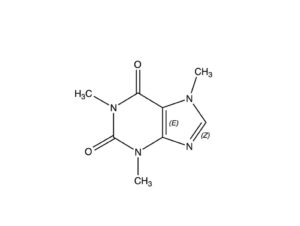 Caffeine is a bitter, white crystalline purine found in seeds, nuts, and leaves of a number of plants native to South America and East Asia. The best known source of caffeine is the coffee bean, but it may also be present in raw unprocessed cacao beans in concentrations from 0.06-0.4%. Caffeine is chemically similar to theobromine, differing only in having one more methyl group than has theobromine.

Wild Coffea plants grow between 9 and 12 meters (29 and 39 feet) tall, and have shallow root systems. Leaves are opposite, simple, broad, and glossy dark green. White flowers emerge on limbs in axillary clusters, and produce fruits called cherries that take 10-11 months to ripen. Coffee fruits  are contained in a drupe 10–15 mm in diameter. They mature as red to purple globes that typically contain two oval seeds — called coffee beans, though they have no relationship with the legumes — that contain 1.5% caffeine compared to 2.7% caffeine contained in the beans produced by C. canephora. It is due to this added caffeine fraction that C. canephora is often referred to as C. robusta.

While on this subject, it must be noted that C. canephora is less susceptible to pests and disease and can be cultivated using much less herbicide and pesticide, is easier to care for, and produces a greater yield than C. arabica. Besides being cheaper to produce, roasted C. canephora beans (commonly called robusta beans) make a strong, earthy-flavored, full-bodied coffee. However, a high pyrazine fraction in the robusta bean adds an offensive aroma and increases its bitterness, so that coffee from C. arabica beans are reputed to have, by comparison, a smooth, less acid taste with a superior, more sophisticated flavor.

Don’t try to sell that to robusta devotees, though. To them, the powerful taste of the harsher robusta beans give it strength, a desirable finish, and — particularly in Italian coffee culture, where in traditional Italian espresso blends high quality robusta beans constitute 10-15% of the grind — a resulting full-bodied taste and thicker foam head (crema) that is greatly prized.

Now, then, let’s get down to business. Coffee is reputed to be chock full of antioxidants. What are they? What do they do? And what do they mean?

With coffee, the answers to the above questions are complicated. Hold on while we put the answers together in a way that is remotely understandable…