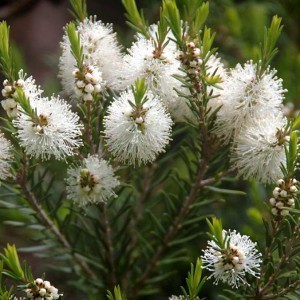 The narrow-leaved paperbark tree (Melaleuca alternifolia), is native to Australia and is found in southeast Queensland and the north coast and adjacent ranges of New South Wales. There it grows along streams and on swampy flats. Where it thrives it is often the dominant species.

A relatively small tree, it grows to about 7 meters (20 feet). It is characterized by a brushy crown and thin, white, paper-like bark. The oil-rich leaves, which are needle-like and shaped much like the needles of the rosemary herb, measure 10–35 millimeters (0.4–1 inch) long, 1 millimeter (0.04 inch) wide.

Oil derived from the leaves of this tree is commonly known as tea tree oil. This oil has been used medicinally by Australian natives for many centuries, and according to legend, for thousands of years. Various reports, some in conflict, chronicle how Captain James Cook and his botanist, Joseph Banks, discovered the native use of tea tree oil and how they and the sailors on Cook’s vessel, the British ship H.M.S. Endeavor, to prevent scurvy and heal wounds.

Cook’s first voyage, in search of the continent of “Terra Australis” led him to find and map the coast of New Zealand. Soon afterward, on April 19, 1770, he sailed to the southeastern coast of Australia, becoming the first European of record to have done so.

When Cook came ashore at what he named, “Botany Bay,” he was met by members of a native tribe, the Gweagal, and began to explore the Australian continent by traveling north along the coast of what is now known as New South Wales. Along the way natives introduced Cook to the medicinal value of a species of tree, whose leaves exuded an aromatic oil. Cook had his crew brew a tea from the leaves, in hopes of curing and preventing scurvy. The experiment worked, and regular use of the tea commenced. It was from this practice that the name “Tea Tree” came into being.

Since then, the use of tea tree oil as a medicine has alternately waxed and waned. Today it has again become popular, and now is available worldwide. Common uses of tea tree oil reflect its antiseptic and anti-inflammatory properties. In recent years the nature of the antimicrobial and anti-inflammatory activities of the oil and its components, as well as their clinical efficacies, have been studied in even greater depth.

Scientific analyses have shown that tea tree oil is composed of terpene hydrocarbons, mainly monoterpenes, sesquiterpenes, and their associated alcohols. Terpenes, which are volatile, aromatic hydrocarbons, may be considered polymers of isoprene, with the formula C5H8. Though early reports on the composition of tea tree oil found 12, 21, and 48 distinct components, a more complete analysis conducted in 1989 by Brophy et al., reported as many as 100 components, ranked according to their ranges of concentrations

Flowers, which emerge for a short period in the spring and early summer, form fluffy white masses of spikes that measure 3–5 centimeters (1–2 inches) long. Scattered on the branches are small cup-shaped woody fruits, 2–3 millimeters (0.08–0.1 inch) in diameter.

Joseph Maiden and Ernst Betche first described this plant in 1905, giving it the taxonomical name Melaleuca linariifolia var. alternifolia, applying the specific name linariifolia to establish their belief that they were describing a variety of M. linariifolia (whose leaves were similar to those of trees in the genus Linaria), rather than a new species.  The fact, however, that leaves of M. linariifolia occur in alternating pairs on each side of the stem, while those of M. alternifolia alternate singly on each side of the stem, suggested to many that the two trees were not varieties, but distinctly separate species. In 1925 Edwin Cheel renamed it as Melaleuca alternifolia.

The narrow-leaved paperbark tree prefers full sun placement but thrives in a variety of climates. It does well in a number of soil profiles, provided the soil is well-drained and moist.