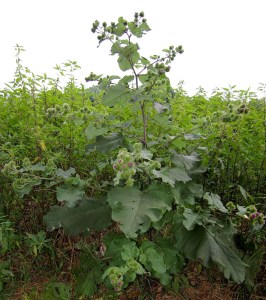 About 15 species of plants are recognized in the genus Arctium, and all are biennial plants commonly known as burdock, in the family daisy or sunflower family (Asteraceae). They are native to the Old World, but several species have been exported so that today, Arctium is well known worldwide. Two species, in particular, are now widespread in North America. All are what many call thistles, as they share many morphological characters with plants in the four thistle genera, Cirsium, Carduus, Silybum and Onopordum. However, while burdock have thorn-like projections on the capsules encasing their flowers that resemble thorns on the flower capsules of many thistles, burdock have none of the prickly leaves and stems that distinguish the thistles. Thus, burdock are not thistles in the most general sense of the term.

Burdock have dark green leaves that, in some species, grow up to 70 cm (28 inches) long. The leaves are large, coarse, and ovate with wooly ventral surfaces; those on  the lower reaches of the stem are heart-shaped. Burdock leafstalks are generally hollow. Burdock flowers, which generally show from July to October, provide pollen and nectar throughout that period for honeybees. Their nectar supply is most welcome in August, when clover has begun to wane, and goldenrod has not yet begun to bloom.

Burdock and the Invention of Velcro 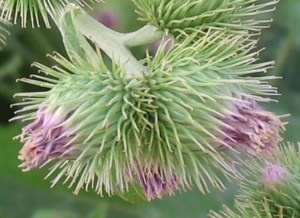 The thorn-like projections on burdock flower capsules are not true thorns, which project outward linearly with a sharp pointed tip. Instead, the projections on burdock flower capsules curve backward, in the form of a hook. While the flower is in bloom the projections are relatively soft and pliable, but when the seed matures in the capsule, the projections become rigid. The multitude of hooks on the seed pod are such that, when furry animals brush against them they invariably latch onto their fur. Once so attached, burdock seed pods are extremely difficult to remove. In most cases, the only way to extricate them is to cut the fur around the burr.

Not only are furry animals victimized by the burdock seed pod, but the weaves of most fabrics are also susceptible to being latched by their hooks. The author can attest to having spent many hours removing burdock seed pods from trousers, shirts and socks, after hiking the hills of Missouri as a youngster. It was particularly discomfiting, he recalls, when burdock seed pods latched onto his socks, as they then began to dig through the sock into the skin of the ankle, soon producing a sore and cutting the hike short…

Ah, but the tenacity of burdock seed pods has a silver lining. At least for one Swiss electrical engineer, namely George de Mestral.  In 1941, de Mestral and his dog took a hike in the woods near his home and returned with a number of unwanted burdock seed pods attached to his clothing and to the fur of his canine companion. While engaged that evening in the arduous task of removing those seed pods, he was intrigued by the fastness of their attachments. Could that same mechanism, he wondered, be converted into something useful? He pondered that question for seven years, and finally — in 1948 — invented a hook and loop fastener that he patented in 1955 and called Velcro. That name, Velcro, is a portmanteau of the French words velours (“velvet”), and crochet, and is a registered trademark.

Burdock root as food and medicine…

Burdock roots are favored for food by the larva of the ghost moth (Hepialus humuli), a lepidopteran found throughout Europe and the British Isles whose larvae also feed on the roots of asparagus and beets. The plant itself is also fed upon by other moth larvae as well.

Lepidopterans are not the only animals that like burdock roots. Humans do as well. The taproot of young burdock plants are often harvested and eaten as a root vegetable, and are favored by many cultures and cuisines. While out of favor, today, in modern European cuisine, burdock root is as popular in Asia as ever. Roots of the greater burdock (Arctium lappa) are called “niúbàng” (牛蒡) in Chinese. The first character, 牛 means ox, cow, or bull; the second, 蒡 means simply burdock, specifically the greater burdock (Arctium lappa).

Cultivated burdock is prized for their slender taproots, which can grow about one meter long and two centimeters across. The flesh is crisp, with a sweet, mild flavor. Teas made from thin slices of fresh, raw root have a golden greenish hue, a soft, smooth, comforting palate, with sweet, mild and subtle notes.

Inasmuch as burdock is closely related to artichoke (both hail from the same tribe, Cynareae, but are placed in separate genera, artichoke being a member of the genus Cynara, which contains a number of plants with spiny or somewhat spiny flower heads) one might wonder if — like the artichoke — burdock flowers are edible. It happens that they are, so long as the immature flower stalks are harvested in the late spring, before the flowers emerge from the bud. They taste much like artichoke, as might be expected. Young burdock stalks may be peeled and eaten raw or boiled. Burdock leaves, too, are eaten in Japan, after being collected in the springtime when the plant is young and the leaves are soft.

Burdock and the Macrobiotic Diet…

During the rise of the macrobiotic diet, in the latter half of the 20th century, burdock received international attention for its culinary value. Burdock provides significant amounts of dietary fiber (GDF, 6g per 100g), is rich in calcium, potassium, amino acids, and adds few calories to the diet.

A polyphenol oxidase in the plant causes its surfaces to darken, and adds a muddy harshness to the taste by forming tannin-iron complexes. This harshness mates well with pork in miso soup (tonjiru) and with Japanese-style pilaf (takikomi gohan).

A soft drink popular today in the UK, labeled Dandelion and burdock under a number of brands, rarely contains either ingredient. A legitimate brew of fermented dandelion and burdock roots, however, has its origins in hedgerow mead commonly drunk in the mediæval period.

Fentimans, a beverage company based in the United Kingdom, offers what it claims to be a faithful recreation of the naturally brewed dandelion and burdock drink, which does contain true extracts of both plants; however, its main ingredients are sugar and pear juice concentrate. AG Barr, made famous for the Scottish soft drink Irn Bru, produces a version of Dandelion and Burdock under the name D’n’B and the slogan “Tall, dark and drinksome”.

Fitzpatrick’s in Rawtenstall, which opened in 1890 and is said to be the last of the UK’s original Temperance Bars, still produces its dandelion and burdock to an original recipe brought over from Ireland at the end of the 19th century.

The medicinal value of burdock leaves, roots, and seeds has been documented in eastern and western medicine for centuries.

Traditional herbalists consider Burdock Root to be a powerful blood purifier. This has led to its use to treat skin diseases such as abscesses, acne, carbuncles, psoriasis and eczema. Burdock can be taken alone, and in combination with other herbs such as Yellow Dock and Sarsaparilla. Its beneficial effects include increasing skin circulation and promoting perspiration, both of which detoxify our body’s integument.

Constituents in burdock leaves and roots reportedly destroy bacteria and fungus cultures. This results from the action of its natural polyacetylenes contained in those parts of the plant. Compounds called polyacetylenes often occur in nature, although in this context, today, the term actually refers to what are known as polyynes, compounds containing multiple acetylene groups (“poly” meaning many), rather than to chains of olefin groups (“poly” meaning polymerization of).

A wide range of organisms synthesize polyynes. These chemicals have various biological activities, including those associated with flavorings and pigments, chemical repellants and toxins, and potential application to biomedical research and pharmaceuticals. For example, the simple fatty acid 8,10-octadecadiynoic acid, which has been isolated from the root bark of the legume Paramacrolobium caeruleum, in the Showy Mistletoe (Loranthaceae) familym has been investigated as a photopolymerizable unit in synthetic phospholipids.

NOTE: Most photopolymerization reactions are chain-growth polymerizations which are initiated by the absorption of visible or ultraviolet light. The light may be absorbed either directly by the reactant monomer (direct photopolymerization), or else by a photosensitizer which absorbs the light and then transfers energy to the monomer. In general only the initiation step differs from that of the ordinary thermal polymerization of the same monomer; subsequent propagation, termination and chain transfer steps are unchanged. In step-growth photopolymerization, absorption of light triggers an addition (or condensation) reaction between two comonomers that do not react without light. A propagation cycle is not initiated because each growth step requires the assistance of light.

The polyyne thiarubrine B is one of several related light-sensitive pigments that have been isolated from the Giant Ragweed (Ambrosia trifida), a plant used in herbal medicine. The thiarubrines have antibiotic, antiviral, and nematocidal activity, and have shown activity against HIV-1 that is mediated by exposure to light. The polyyne falcarindiol, the main compound responsible for bitterness in carrots, is the most-active among several polyynes with potential anticancer activity found in Devil’s club (Oplopanax horridus). Other polyynes from plants include oenanthotoxin and cicutoxin. Polyynes including falcarindiol can be found in Apiaceae vegetables like carrot, celery, fennel, parsley and parsnip where they show cytotoxic activities. Aliphatic C(17)- polyynes of the falcarinol type have been found to act as metabolic modulators and are now being investigated for their potential as health-promoting nutraceuticals.

The diuretic effect produced by burdock aids eliminating impurities in the bloodstream. It contains high concentrations of the complex carbohydrate known as inulin, which is known to strengthen the liver, and which in combination with mucilage aids in the soothing the gastrointestinal tract. Inulin is also helpful for those afflicted with diabetes and hypoglycemia, as the carbohydrates it supplies do not provoke rapid insulin production.

The lignan arctigenin contained in Burdock as an inhibitor of experimental tumor growth.

King’s American Dispensatory, written by Harvey Wickes Felter, M.D., and John Uri Lloyd, Phr. M., Ph. D., in 1898, described Burdock’s known chemical composition as known at the time:  “The root was quantitatively analyzed by G. A. Weckler (Amer. Jour. Pharm., 1887, p. 393) who found fixed oil (0.4 per cent), mucilage, sugar, altered tannin (phlobaphene, 0.075 per cent), inulin, resin, ash (3.67 per cent), ect. The aqueous solution of the alcoholic extract gave indications of a glucoside. The seeds were analyzed by Prof. Trimble and Mr. F. D. McFarland (Amer. Jour. Pharm., 1885, p. 127, and 1888, p. 79). Moisture was 7.3 percent, and ash 5.34 per cent. Petroleum spirit abstracted 15.4 per cent of a bland, fixed oil, dyring upon exposure in thin layers to the air. It has a specific gravity of 0.930, and is soluble in ether, chloroform, benzol, and hot, absolute alcohol. A crystalline, bitter substance was also obtained by extracting the drug first with petroleum spirit, then with alcohol, pouring the concentrated alcoholic solution into water, whereby resin is separated. The aqueous solution contains the bitter principle, which proved to be a glucosid devoid of alkaloidal reaction. The name lappin is applied to it. Upon hydrolysis with very dilute acid, it is decomposed into sugar and alcohol-soluble resin”.