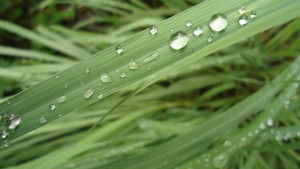 Lemongrass is a genus of Asian, African, Australian, and tropical island plants in the grass family (Poaceae). Certain species, such as the Asian lemongrass (Cymbopogon citratus), are commonly cultivated as culinary and medicinal herbs because of their lemon-like flavor and scent.

In Asian cuisine, lemongrass is widely used as a culinary herb. In India it is also used widely as a medicinal herb. It has a strong citrus scent and flavor and can be used fresh or dried. Dried lemongrass leaves may be cut into small sections or ground into a coarse or fine powder. Lemongrass oil is also used as a pesticidal repellant, particularly with respect to mosquitoes. It is known to be lethal to certain organisms, including springtails. As a preservative, lemongrass oil has been shown to possess antifungal properties.

Though effective at repelling certain insects like mosquitoes, when used alone it can be highly attractive to honey bees, as constituents in the oil mimic those in honeybee attractant pheromones. When used in combination with certain other herbs, however, lemongrass oil is less likely to act as a honeybee attractant.

Its leaves are dried for use in brewing a flavorful/medicinal tea that has the flavor of sweetened lemon absent lemon’s sour tartness, dried and ground to a powder for use in herbal supplements that are applied topically or taken orally for specific and general health benefits. Medicinal properties long claimed for this and closely related species of lemon grass include its alleged function as an anxiolytic, hypnotic, and anticonvulsant, as well as a stimulant, sudorific, antiperiodic, anticatarrhal.

The essential oil distilled from this plant has been used as a carminative, depressant, analgesic, antipyretic, antibacterial, and antifungal agent.

Chemical analysis of the plant has shown it contains myrcene, citronella, and geranilol. Low dose studies conducted to determine how the essential oil from this plant might improve human health have been mixed, often showing no observable effects. More intensive studies demonstrate an enhancement of GABA-ergic neurotransmission through positive allosteric agonism similar to that of the benzodiazepines, though at doses too high for practical use.

Myrcene, or β-myrcene, is a natural, olefinic, organic, compound hydrocarbon. More precisely, it is classified as a monoterpene. Monoterpenes are dimers of isoprenoid precursors, and of those found in nature myrcene is one of the most important. It is a component of the essential oil of several plants including bay, cannabis, ylang-ylang, wild thyme, parsley, and hops. It is produced mainly semi-synthetically from myrcia, from which it gets its name. It is a key intermediate in the production of a number of fragrances. α-Myrcene is the name for the structural isomer 2-methyl-6-methylene-1,7-octadiene, which is not found in nature and is little used.