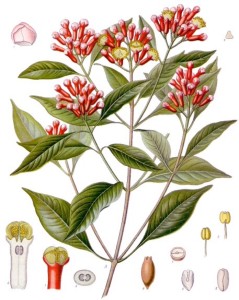 The spice known as clove is derived from the aromatic, unopened flower buds of a tree in the family Myrtaceae, Syzygium aromaticum. These trees are native to the Maluku Islands in Indonesia, but have now been exported worldwide, mainly to tropical and subtropical regions.

In many of those environs the climate and soil profiles are suitable for the tree to thrive. Today clove trees are cultivated for spice production in Bangladesh, Indonesia, India, Madagascar, Zanzibar, Pakistan, Sri Lanka, and Tanzania.

Syzygium aromaticum is an evergreen that grows from 8 to 12 meters (25-40 ft) tall, with large leaves and blood-red flowers grouped in terminal clusters. Flowers bud with a pale hue, slowly green up, then redden brightly as they near harvest.

Once the buds measure 1.5-2.0 cm long, they are ready for harvest. The unopened bud is comprised of of a foundational calyx, terminating in four sepals that encase and spread out around four unopened petals. The unopened petals curve inward, making a small central ball at the tip of the bud.

Asian, African, and the Near and Middle East cuisines have long used cloves to flavor meats, curries, and marinades. Fruits — like apples, pears, and rhubarb — have also been flavored with cloves. When added to hot drinks, often in combination with lemon and similar aromatics, cloves lend both aroma and flavor, transforming a ho-hum drink into an exotic beverage.

In Mexico, cloves are best known as clavos de olor, and often are found in the company of other aromatic spices like cumin and cinnamon.

Medicinally, cloves have important roles in Indian Ayurvedic medicine, Chinese medicine, and western herbalism and dentistry. The essential oil is often used as a painkiller for dental emergencies, and as a carminative to prevent or mitigate the formation of intestinal flatus by increasing hydrochloric acid in the stomach and improving peristalsis in the gut.

Cloves are also believed by some to be a natural anthelmintic (vermicide) capable of controlling all stages of helminthic parasites. Eugenol, the most prevalent and powerful natural constituent in cloves (and the agent supposedly responsible for cloves’ antihelminthic properties), can be absorbed into the bloodstream and from there infused into other body tissues (including the brain). This has led some to suggest that oral ingestion of cloves is capable of controlling helminthic parasites not only in the gut but also throughout the body. Such claims, however, have not been scientifically verified.

The number of unsubstantiated claims for cloves, clove oil, and eugenol rose dramatically in the last decade of the previous millennium and the first decade of the new millennium. In response, the U.S. Food and Drug Administration posted a number of warnings about clove usage, along with a series of disclaimers. As a result, the overt use of cloves, clove oil, and eugenol in alternative Western medicine has likely declined.

Confirmed historical use of cloves by mankind dates to as early as 1720 BCE. Cloves have been found in a ceramic vessel in Syria, along with other evidence dating to that time frame. It is also known from ancient writings that a Chinese leader in the Han Dynasty, dating to the third century BCE, stipulated that all who wished to address him must first cleanse their breath by chewing cloves.

Today, it is easily demonstrated that such simple practices are efficacious, though the taste of the cloves is unsavory to many, and some users may be troubled by unexpected side effects. For example, as the cloves are being chewed, small clove particles may flow into the throat where they can irritate or even anesthetize the larynx, leading to coughing spells and difficulties in speaking.

Those who regularly use cloves in this way learn to develop habits that minimize such problems. For example, the clove buds need not be chewed, but may be simply tucked between cheek and gum and allowed to slowly infuse the saliva with their essential oils. At first, the hard bud may feel uncomfortable, but it soon softens in the mouth and can be held in place, between cheek and gum, for hours at a time without any unpleasant effects.

Other important essential oil constituents of clove oil include acetyl eugenol, beta-caryophyllene and vanillin, crategolic acid, tannins such as bicornin, gallotannic acid, methyl salicylate, a number of flavonoids including eugenin, kaempferol, rhamnetin, and eugenitin, the triterpenoids oleanolic acid, stigmasterol, and campesterol, plus a number of sesquiterpenes.

Using the agar well diffusion method, Singh et al. (2007) investigated the effects of eugenol on the growth of Gram-positive Bacillus cereus, B. subtilis, and Staphylococcus aureus, as well as on Gram-negative Escherichia coli, Salmonella typhi, and Pseudomonas aeruginosa. bacteria. At 1,000 ppm, eugenol inhibited the growth of the bacteria and complete inhibition was obtained against P. aeruginosa at a high concentration of 2,000 ppm. This inhibition was high in comparison to ampicillin (1 mg/mL) used as a positive control.

Other studies have confirmed the antibacterial activity of eugenol against various pathogens such as E. coli, B. cereus, Helicobacter pylori, S. aureus, S. epidermidis, Streptococcus pneumoniae and S. pyogenes.

Eugenol is toxic in relatively small quantities; for example, a dose of 5–10 ml has been reported as a near fatal dose for a two-year-old child. Undiluted clove oil should be handled very carefully and kept out of the reach of children. Besides the risks associated with mammalian toxicity, eugenol is known as a potent solvent capable of marking many if not most plastics. It should not be used in undiluted form on any surfaces without first testing an inconspicuous part to determine if unintended results might result.