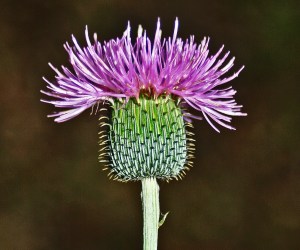 Within the Aster family, several genre of perennial flowering plants are commonly known as thistles. Among these is the genus Cirsium, which contains those most accurately referred to as plume thistles.

The plume thistles are distinguished from other thistle genre by having feathered hairs attached to their cypselae (Greek kupsele = “hollow vessel”). The fruit of the Asteraceae, being derived from a compound inferior ovary with a single locule, is not technically an achene but a cypsela, and the feathered hairs of the plume thistle function much as those of the dandelion, to promote the biological dispersal of seed.

Plume thistles have effusive flower heads, and many are purple, rose, or pink, as in this specimen. The flower head is composed of a concentration of radially symmetrical disk flowers, perched at the terminus of a branch. The stems are erect, and the leaves are armed with numerous prickles that, as the plant matures, become more hardened with age

The word Cirsium has Greek origins (kirsos = “swollen vein”), and is a relic of the ancient use of thistles to treat vascular conditions.

The larvae of a number of Lepidopteran larvae feed on Cirsium thistles, and the seeds are favored by birds, particularly finches. On this basis alone the thistle should be considered an important botanical in our midst. But it figures mightily in human history as well.

Because one cannot provoke a thistle with impunity–i.e., wounding a thistle exacts punishment on the attacker–the thistle, much like the burr, became an early symbol of nobility among the Celts and the Swiss. Legends in both cultures relate tales of enemies who, barefooted, stepped upon a thistle while preparing an attack by night. The involuntary cry, thus produced, alerted the garrison, prevented an ambush, and saved the day.

Alas, to most modern Europeans and Americans, the thistle is no more than a weed…