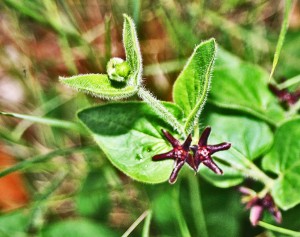 The Purple Milkweed Vine (Matelea biflora) is rather common in its native habitat of the south central U.S. (Texas, Oklahoma, and New Mexico). However–because it is not showy–the species is more often missed than noticed by wildflower enthusiasts.

Indeed, most books on wildflowers omit mention of it. Out of a stack of popular books on wildflowers in Texas and North America, only Marshall Enquist, in his book “Wildflowers of the Texas Hill Country” (published 1987), mentions it at all. Similarly, a search of the Internet via Yahoo!, on 28 March 2010, produced but 10 references to the species.

As a result, finding one of these plants on the trail will likely lead one to spend considerable time determining its identity, particularly if the dictum “Leave only footprints, take nothing but photos,” is followed. But that time is well spent, as it leads to the discovery of a neglected, but handsome plant. Of course, beauty is in the eye of the beholder…

I found it in several locations at Fern Bluff Park, in Round Rock, Texas. To notice the flowers, it is necessary to look closely at the dark emanations that attach to the stems at the leaf axils. 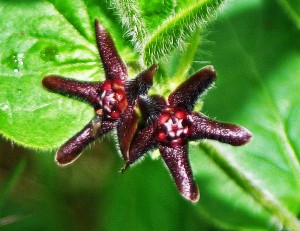 The woody rootstock of this plant provides the point from which the vines radiate outward. From the rootstock the vines proceed, either along the ground or arching tentatively into the air.  The vines themselves grow to about two feet in length, and no more. Thus they do not make much of a fuss for themselves, and hardly even merit–to the minds of many–the title of  “vine”.

Some report that all parts of the plant are poisonous, and that handling the vine can produce a form of contact dermatitis.