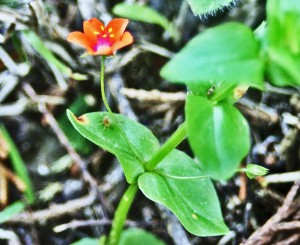 Every walk I took in the Fern Bluff park in Round Rock, Texas, during 2007, began with parking on Park Valley Drive, next to the toddler playground. While on one of those walks, meandering between the curb and the playground, this pretty orange flower caught my eye. The first one that came into view was so small it looked like a little fluff of rust-colored paper and I passed it by without a second glance. Before long, several more were spotted. They were not very obvious, but once the eye was keyed to look for them, they seemed to be all over.

Scarlet Pimpernel is the only species of Anagallis found in North America. It is common in Europe, and in England it typically blooms in August and later. There it is considered a weed, and is used by landscapers as an indicator of light soils in need of buttressing with humus and topping up.

The English have amassed as many as twelve common names for the plant, including Shepherd’s Weatherglass and Poor Man’s Weatherglass. These both derive from the flower’s reputation for closing before bad weather approaches. It is also called Shepherd’s Clock, because the petals supposedly open promptly at 8 A.M. and close promptly at 3 P.M. (see “The History and Folklore of North American Wildflowers”, by Timothy Coffey, 1993). Of course, that notion was put to the test on this walk, and passed. I found this very open flower, and a multitude of its brethren, fully unfurled in the brigt sunlight, past the 8th hour of the morn, but prior to the 3rd hour past noon. Pimpernel flowers remain open only in direct sunlight, and close when shaded.

This plant has a long history as a medicinal herb. For example, Pliny (the naturalist Pliny [pron. “plin-ney”] the Elder, born in the year 23, of the Current Era-died on Aug. 25, 79 C.E., while attempting a maritime rescue of a friend and his family from the eruption of Mount Vesuvius; Pliny’s full given name was Gaius Plinius Secundus) spoke of its value in liver complaints. Its generic name Anagallis was given by Dioscorides, and is thought by some to be derived from the Greek Anagelao, signifying ‘to laugh (aloud),’ because it supposedly removes the depression that liver dysfunctions produce. Another explanation for the generic name is that the Greek ana, which means “again”, combined with agallein, “to delight in”, is a reference to the constant opening and closing of the blossoms in response to changes in sunlight and weather. 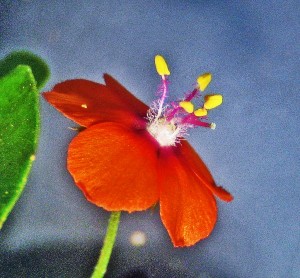 Scarlet Pimpernel blossoms are perched on leaf axils, as shown in the photograph at the top of the page. The leaves are bright green, ovate, and sessile (they lack a stalk–i.e., a petiole–and so attach directly to the stem). The petal margins are vaguely crenate (New Latin crenatus = notch, from a reading in a “corrupt” passage attributed to Pliny the Elder; thus, having low, rounded, or scalloped projections), with small glandular hairs.

The corolla (the petals collectively, usually as in this case, colored or showy) consists of a short tube and 5 lobes (indentations that do not break the continuity of the corolla’s structure, in this case, the individual petals), with the tube so short in the pimpernels that the lobes appear as separate petals.

The distal ends of each stamen (the bright yellow swellings at the ends of each stalk that emerges from the center of the blossom) are the anthers, or (male) pollen bearing part of the flower. The staminal filaments on which the anthers are perched are purple at their distal ends, but whitish nearer the corolla, and are replete with conspicuous hairs.

A variety of this flower, Anagallis arvensis, var. caerulea, has a blue corolla.