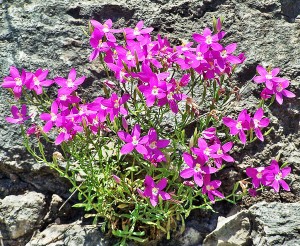 Linda had written me concerning a snake in her yard, but because she could not supply a photo it was not possible to be very helpful to her. We discussed the fine art of photography, and she admitted to being an erstwhile photog of some repute:

“I think this is a better one of the dragonfly which was taken on the leaf of a pineapple plant in my back yard in summer ‘06.  I’ve also attached a walking stick (?) that was taken about the same time, attached to the side of my son’s home in Boerne.
And I included two of my favorite wildflowers, the white poppy (or thistle) taken near Big Bend Ranch outside Presidio, and the umbrella flower… I think that’s what it’s called, I can’t find my book or poster!  The latter grow in the hill country on dry, rocky outcroppings and along roadsides in the early spring but they’re so small I think most people don’t notice them.  They’re only about 6-7″ tall and the little pink clusters atop a stem remind me of an ice cream cone.
Enjoy! and thank you for your interest, and especially for what you do… is this a profession for you or a passion or just a hobby?  Lot of work.” 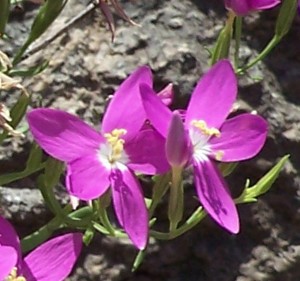 I explained that this “work” is what drives me, and loving it makes every day a holiday. It was fun getting reacquainted with the gentian family of wildflowers (Linda’s umbrella flower hails from that family and her photo of that cluster of gentian flowers is the subject of this posting), as my work with snakes and spiders has kept me so occupied over the past few years that little time has been spent on the wildflowers (a passion that has led me to much study over the past twenty years).

That will change in 2010, as more time will again be devoted to these beauties (without, of course, neglecting the snakes or spiders in the process). It makes life much more worthwhile to study and photograph them. And methinks life should be, if anything at all, worthwhile. But I digress…

It happens that the flower cluster Linda photographed was most likely the mountain pink (Zeltnera beyrichii). I say “most likely” because there are many other members of the Gentianaceae in Texas besides Zeltnera beyrichii (the genus Zeltnera, alone, has at least 25 recognized species native to North America, Central America, and northern South America; it is not represented elsewhere in the world, but has close relatives in the genera Exaculum and Schenkia, natives of the Mediterranean and Australia), and distinguishing between them is not that easy from photographic evidence alone. Still, I feel fairly comfortable with this identification.

You may not know the mountain pink under the taxonomical moniker Zeltnera beyrichii. Until 2004 this flower was known as Centaurium beyrichii, but as with many species that are undergoing close molecular scrutiny today, its designation was modified based on a better understanding of the plant’s DNA. The mountain pink is often mistaken for blue-eyed grass (Sisyrinchium spp.), another radially symmetrical flower that occurs in clusters in central Texas. However, the genus Sisyrinchium is in the Iris family (Iridaceae), and though superficially resembling the gentians, iris flowers that are radially symmetrical (many irises are bilaterally symmetrical instead) are quite different when examined up close. 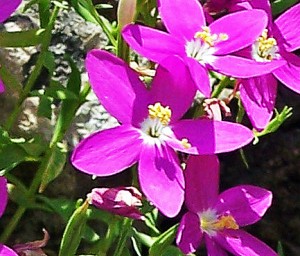 One of the easiest ways to distinguish them in the field is to count the petals. Gentians usually have but five petals per flower, while most radially symmetrical irises typically have six.  Another important difference is the structure of the leaves. In the gentians the leaves are short, and are borne on stems, arranged opposite one another (vs. alternately)along the stem. In the irises, the stems emerge from the base of the plant, and are long and narrow, like the leaves of a grass–which partially explains the common name, “blue-eyed grass.” Note, however, that blue-eyed grass is not a member of the grass family (Graminae).

Individual flowers in the Mountain Pink cluster are shown, as enlargements, in two separate photos.  The second of these shows, in addition to the opened flowers, a bud in its foreground.

Notice that the petals in each flower are arranged so that the bud in the foreground will show them twisted to the right (to find the edge of the petal, one must turn the bud to the right, so that, on encountering the edge, the petal to its right is the next petal in the whorl). It cannot be confirmed from these photos, but each petal has its own stamen and pistil, and the stamen is firmly attached to the petal; thus, if you pull a stamen off, the petal will come along for the ride.

The bud also demonstrates the superior ovary of the hypogynous flowers of the gentian family (hypogyny, in flowers, is a condition in which the calyx, corolla, and stamens are inserted on the receptacle, or axis, below, and free from, the ovary; thus the ovary is above, i.e., superior to, the axis). Note also the tiny leaves, arranged opposite one another on the stem of the plant.